In December 2019, Jeff Barr published this post announcing the launch of a new Local Zone in Los Angeles, California. A Local Zone extends existing AWS regions closer to end-users, providing single-digit millisecond latency to a subset of AWS services in the zone. Local Zones are attached to parent regions – in this case US West (Oregon) – and access to services and resources is performed through the parent region’s endpoints. This makes Local Zones transparent to your applications and end-users. Applications running in a Local Zone have access to all AWS services, not just the subset in the zone, via Amazon’s redundant and very high bandwidth private network backbone to the parent region.

At the end of the post, Jeff wrote (and I quote) – “In the fullness of time (as Andy Jassy often says), there could very well be more than one Local Zone in any given geographic area. In 2020, we will open a second one in Los Angeles (us-west-2-lax-1b), and are giving consideration to other locations.”

Well – that time has come! I’m pleased to announce that following customer requests, AWS today launched a second Local Zone in Los Angeles to further help customers in the area (and Southern California generally) to achieve even greater high-availability and fault tolerance for their applications, in conjunction with very low latency. These customers have workloads that require very low latency, such as artist workstations, local rendering, gaming, financial transaction processing, and more.

Enabling Local Zones
Once you opt-in to use one or more Local Zones in your account, they appear as additional Availability Zones for you to use when deploying your applications and resources. The original zone, launched last December, was us-west-2-lax-1a. The additional zone, available to all customers now, is us-west-2-lax-1b. Local Zones can be enabled using the new Settings section of the EC2 Management Console, as shown below

As noted in Jeff’s original post, you can also opt-in (or out) of access to Local Zones with the AWS Command Line Interface (CLI) (aws ec2 modify-availability-zone-group command), AWS Tools for PowerShell (Edit-EC2AvailabilityZoneGroup cmdlet), or by calling the ModifyAvailabilityZoneGroup API from one of the AWS SDKs.

Using Local Zones for Highly-Available, Low-Latency Applications
Local Zones can be used to further improve high availability for applications, as well as ultra-low latency. One scenario is for enterprise migrations using a hybrid architecture. These enterprises have workloads that currently run in existing on-premises data centers in the Los Angeles metro area and it can be daunting to migrate these application portfolios, many of them interdependent, to the cloud. By utilizing AWS Direct Connect in conjunction with a Local Zone, these customers can establish a hybrid environment that provides ultra-low latency communication between applications running in the Los Angeles Local Zone and the on-premises installations without needing a potentially expensive revamp of their architecture. As time progresses, the on-premises applications can be migrated to the cloud in an incremental fashion, simplifying the overall migration process. The diagram below illustrates this type of enterprise hybrid architecture. 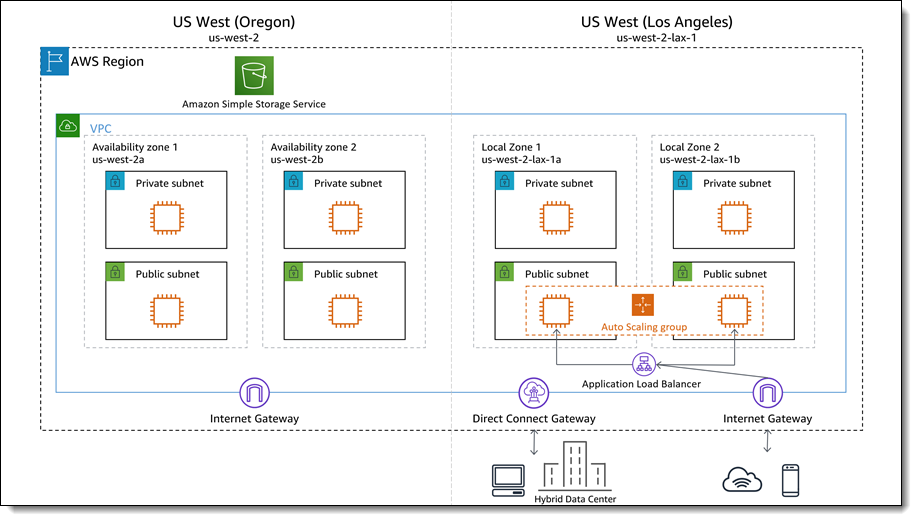 Anecdotally, we have heard from customers using this type of hybrid architecture, combining Local Zones with AWS Direct Connect, that they are achieving sub-1.5ms latency communication between the applications hosted in the Local Zone and those in the on-premises data center in the LA metro area.

Virtual desktops for rendering and animation workloads is another scenario for Local Zones. For these workloads, latency is critical and the addition of a second Local Zone for Los Angeles gives additional failover capability, without sacrificing latency, should the need arise.

As always, the teams are listening to your feedback – thank you! – and are working on adding Local Zones in other locations, along with the availability of additional services, including Amazon ECS Amazon Elastic Kubernetes Service, Amazon ElastiCache, Amazon Elasticsearch Service, and Amazon Managed Streaming for Apache Kafka. If you’re an AWS customer based in Los Angeles or Southern California, with a requirement for even greater high-availability and very low latency for your workloads, then we invite you to check out the new Local Zone. More details and pricing information can be found at Local Zone.