Today, I am so excited to tell you about the new Amazon Interactive Video Service, which allows you to add live video directly into your own apps and websites. If you are anything like me, you are going to be blown away by how simple the team have made it to integrate interactive, low latency, live video into an application.

The service enables you to create a channel using either the Amazon Interactive Video Service (IVS) Console or the API. You can then use any standard streaming software to stream video to this channel, and the service does everything required to make the live video available to any viewer around the world. The service includes a player SDK that make it straightforward to get the live video integrated into your web, iOS, or Android project.

I think I would be impressed by this service if its capabilities stopped there, but the team have really gone the extra mile and added two key features that I think make this service unique.

Firstly, the video is low latency, which means that the time between you broadcasting and the time the video shows up on your viewer’s screens can be as low as 2-3 seconds. Low latency is vital because this service aims to help you build interactive realtime applications, and this is only possible if there is a minimal delay.

Secondly, the team have added the ability to send timed metadata along with the video so that you can fire events in your application at crucial points in the live stream. So for example, you could send an event to say that a live poll is open, and your app could respond and allow viewers to vote in the poll alongside the live video.

The combination of these two features means that you can build experiences that create a more valuable relationship with your viewers on your own websites and applications. For example, if you were live-streaming a product launch, you could synchronize additional product information to be displayed as new products appear in the video. You could even show a buy now button that allows viewers to purchase the exact product they are watching at that moment on the live-stream.

Over the last few months, I have been running live quizzes on Twitch.tv, and this new service got me thinking that I could build a more personalized and integrated version directly on my website. Let me show you how you would create something like this by heading over to the Amazon IVS Console and creating a channel.

On the first screen of the Amazon IVS console I see a button called Create channel, I click on this to start creating my channel. 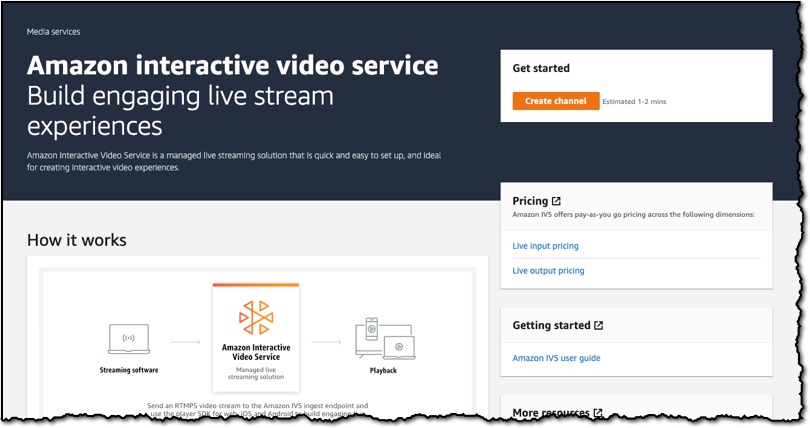 I give my channel a name and choose the default configuration, which means I want to deliver video in Full HD, and I want low latency. I then click the Create Channel button at the bottom. 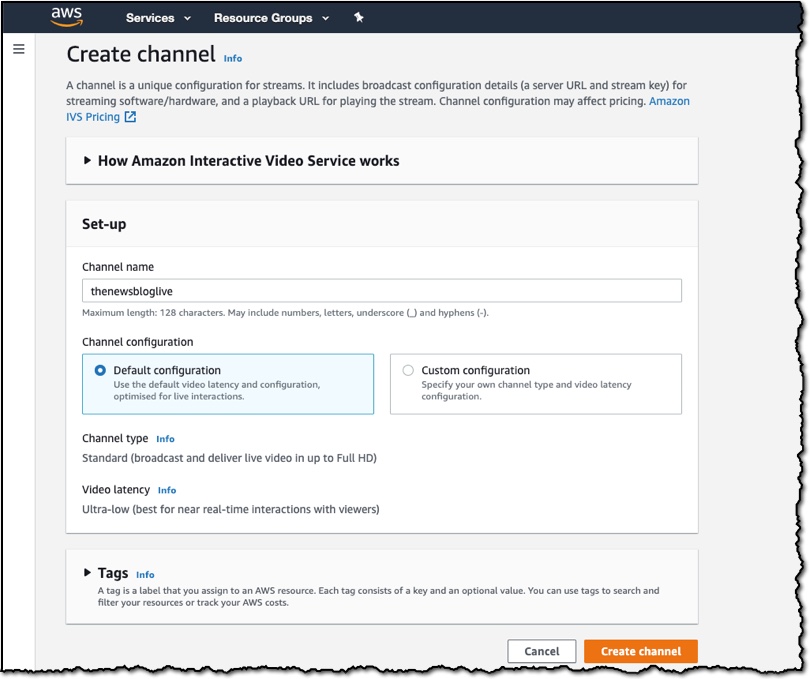 A few seconds later, I receive a message saying Channel successfully created. On the screen, there is a Get started section which explains how to configure the computer or device that I am using to stream my video. 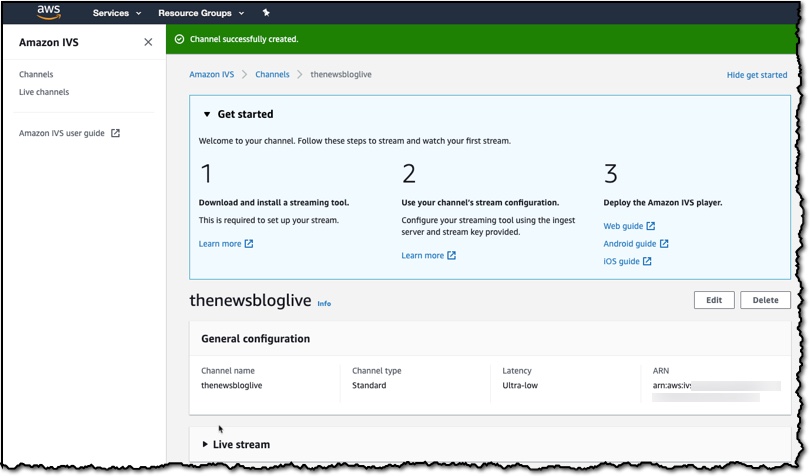 On the same screen, you can see some Stream configuration information. The Ingest server and the Stream key are the two pieces of information I will need to start sending video to the service.

I use a software package called XSplit Broadcaster for all my online streaming, but the next few steps would be similar in whatever broadcast software you use. I set up a new output and choose Custom RTMPS. 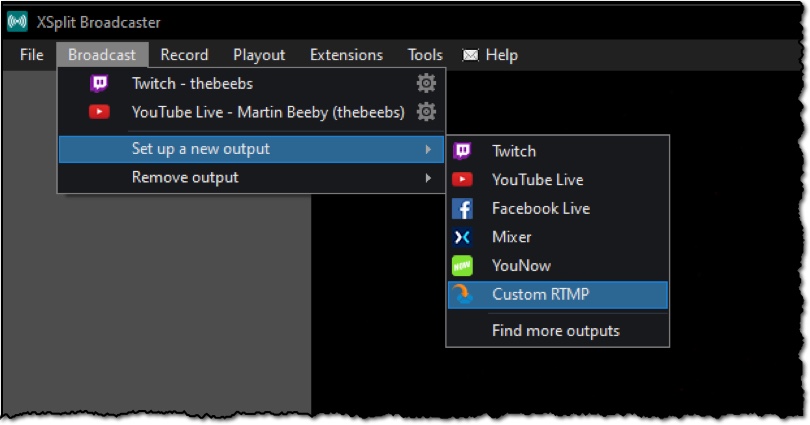 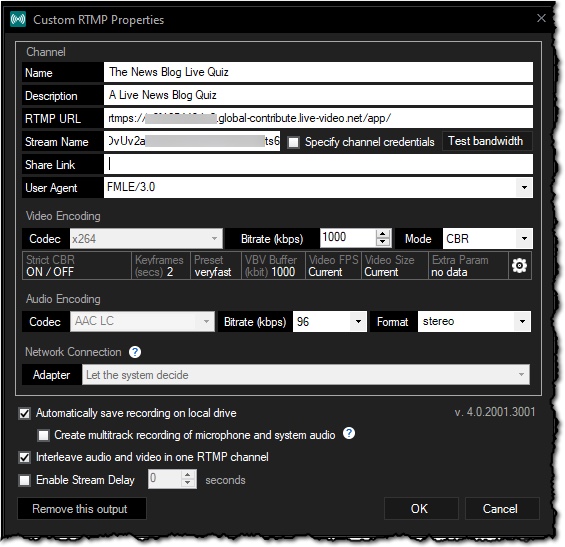 Now that I have configured the output, I can now broadcast to the new Custom RTMPS output. Behind the scenes, the software begins streaming the video and audio to the Amazon Interactive Video Service.

Back over at the console, in the Live stream section, you should now see your live video appear in the console. In my experience, it took a few seconds fo the video to start streaming. 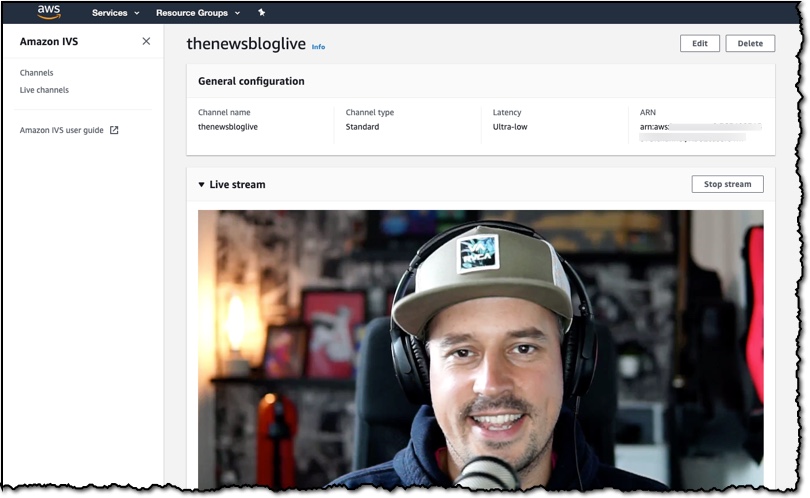 To add this live video into a website, I will need to use the Player SDK. In the Player configuration section on the console, I can see a Playback URL, and I will need this to configure a player to play my video.

The team that built this service created a fantastic example project on Codepen, which I will modify to test out my video and create my quiz. This example uses the JavaScript Player SDK, and all I need to do to play my video is to set the playbackUrl variable to point to my newly created Playback URL. Once I have done this, my video stream appears on the webpage.

This example project has some code which handles the timed metadata feature that I talked about earlier. Basically when I send metadata to the service it will relay this to the player SDK as an event. I can then handle this event and do exciting things with it. In this example, I add an event listener to listen for a PlayerEventType.TEXT_METADATA_CUE event and then use the cue object that is passed to my function to show some on-screen HTML buttons which allows a user to vote in my poll.

At any time during my broadcast I can send Metadata to my channel using the PutMetadata API. As an example, If i send the following command using the the AWS CLI then the data will be sent to the service and then a few seconds later the PlayerEventType.TEXT_METADATA_CUE event will be raised in my JavaScript code.

As you can see below the poll HTML elements are shown as an overlay on top of the live video and users can interact with it and vote in my poll.

The Amazon IVS Console and APIs are available today in the Europe (Ireland), US East (N. Virginia), and US West (Oregon) regions. You will need to use one of those regions to create and modify your channels, however, video ingestion and delivery is available around the globe over a managed network of infrastructure that is optimized for live video. Check out the FAQ’s to get more details on the services global coverage.

I hope you enjoy this service as much as I do. I can’t wait to see what you are going to build with it.